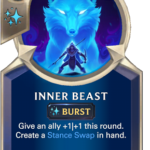 A total of three Legends of Runeterra spells are getting added via Patch 3.6 within the Noxus, Freljord, and Demacia regions.

Riot Games continues to drop new LoR spells into updates, improving a region’s ability to remain competitively viable within the meta. Three spells were added during Patch 3.4 and three more are getting added in Patch 3.6: For Glory!, Might of the Vanguard, and Inner Beast. The goal of these three new spells, according to Riot, is to improve the Elites and Reputation archetypes while also boosting gameplay options for the LoR champion Udyr.

Here are the three new Legends of Runeterra spells dropping in Patch 3.6.

Synergizing with Udyr’s new level-up condition and Stances, Inner Beast is a solid two-drop worth playing with the spirit walker.

Elites of Demacia once dominated the meta. While it’s still a strong archetype, the LoR team has decided to buff it with Might of the Vanguard.

Dauntless Vanguard is a three-drop 3/3 Elite that also gets summoned via the Succession Demacian spell—synergizing with Battlesmith, For the Fallen, and Field Promotion. Might of the Vanguard is also a solid Demaciia region top-end finisher in conjunction with Cithria the Bold and Cithria, Lady of the Clouds.

The Reputation archetype never had much time in the LoR spotlight, prompting the balance team to create For Glory!

Reputation is an LoR keyword that triggers effects when you have struck for five or more damage at least four times this game. And Trifarian Gloryseeker is a two-drop that has Challenger and can’t block. For six mana, this is a bad deal, unless it’s played in a Reputation-specific archetype. At three mana, the spell is decent and has potential.

This LOL Verifier checks to make sure you actually laughed

Spicy Legends of Runeterra nerfs and buffs in Patch 3.13 will affect Seasonal meta