Riot Games introduced five new skins for the High Noon line today for Katarina, Leona, Mordekaiser, Talon, and Varus that will be soon added to the League of Legends client. Along with the new skins, there have been a few voice lines released on the SkinSpotlights YouTube channel, specifically from Leona, that hint at other High Noon skins potentially coming in the future.

Leona’s interactions in particular hint at five other High Noon skins for Samira, Sion, Tahm Kench, Twitch, and Viktor. Tahm Kench’s skin for the High Noon line can also be seen in Leona’s splash art, with a crocodile-like appearance and the evil grin associated with the River King. 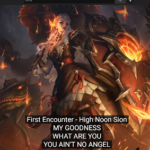 Set to be released on May 12, after Patch 12.9 goes live, the new High Noon skins previewed today might just be the first batch for this line this year.

Arcane becomes the first gaming show to win an Emmy